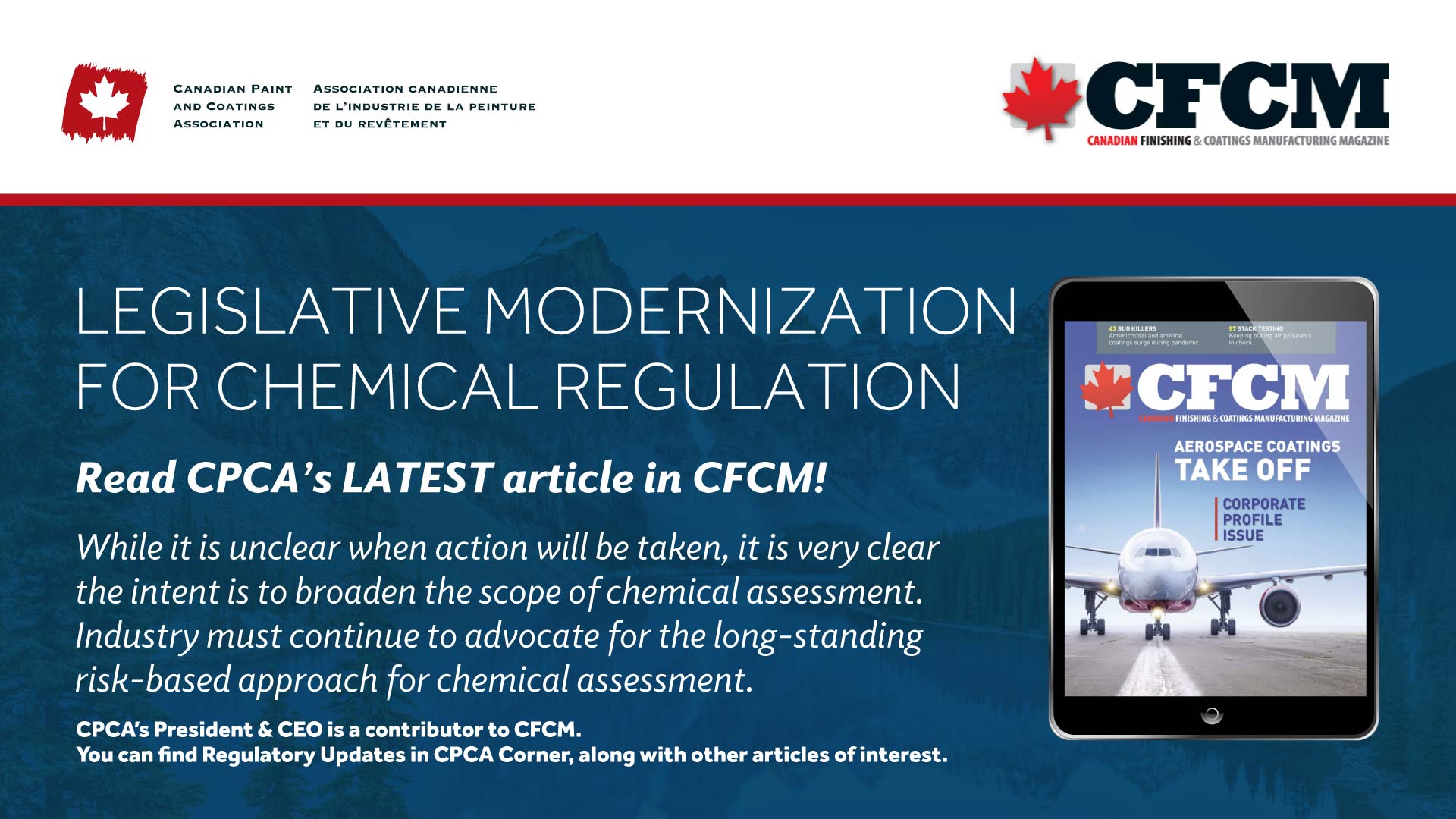 Once again the government in Ottawa is talking about legislative ‘modernization’, which usually means tightening the noose around efforts of the chemical sector to deliver highly performing products for customers.

Developments around the anticipated federal amendments to the Canadian Environmental Protection Act (CEPA) were discussed at a recent meeting of multiple chemical industry groups and the views varied, but all agree that the federal government is signaling amendments to CEPA are imminent.  Although the specific timeline is unclear, due to uncertainties around a likely federal election in the Spring, based on a federal budget in March and the ongoing economic challenges precipitated by the pandemic. While it is unclear when action will be taken by this government, it is very clear the intent is to broaden the scope of chemical assessment and the related risk management measures such as regulations and other restrictions. Industry must continue to advocate for the long-standing risk-based approach for chemical assessment and not accept incessant and unsubstantiated calls for hazard-based approaches that has strangled the European Union under REACH for years.

There has not yet been final approval for extending the 15-year old federal Chemicals Management Plan, assessing chemicals in commerce, and the related funding of approximately $500 million necessary to run the Post-2020 CMP program for another five years.

The federal Cabinet, under direction of the Environment Minister, has reviewed a draft approach on what CEPA ‘modernization’ might look like. In that undertaking certain points are likely to be considered in the eventual amendments tabled and the ones of greatest concern for chemical industries include the following:

Currently, there is no anticipated change to the risk-based approach by the current Environment Minister but continued pressures from the ENGO community could cause this to change.

Such ‘modernization’ is of course of grave concern for the coatings, adhesives, sealants and elastomer (CASE) industry, as one of the most implicated industries under CEPA with respect to chemical assessment. A broader scope for assessment will mean more bans and more use restrictions than in the past. If this proceeds as expected it will likely be problematic for product formulations writ large. CPCA, and other industry groups, must now focus on highlighting the benefits of current chemicals in commerce and how they are often misrepresented in the context of inherent toxicity and other challenges under the heading of ‘problem formulations.’ Industry must be clear as to ‘how’ these substances are actually used and ‘why’ they are critical for product performance in multiple industry sectors. For example, many coatings products ultimately help extend the life-cycle of valuable private and public assets, while at the same time reducing the environmental footprint of the industries they serve. These industry sectors include construction, auto, marine, transportation, aerospace, etc.

The benefits of certain chemical inputs are often not well understood by those who seek to restrict certain chemical uses and secure more bans.  Industry must be specific about the complexity of assessing such chemicals and their specific use profiles. In fact, in many cases they are not even suited for various risk-assessment and government decision-making frameworks. It’s the job of the paint and coatings sector to point out the enormity of such benefits to those conducting assessments, those amending legislation and those using the products. As such, industry must up its game on raising awareness as to why chemicals in their products are of critical importance across multiple value chains.

If work on the ‘modernization’ of CEPA evolves as noted above, the final decision on CEPA amendments will be taken up by the current Government when Parliament resumes in the Fall or by a new government, if an election is called between now and September, which is highly likely.  Given the above it will be important for the entire chemical industry to promote and support the existing risk-based approach to chemicals management in Canada. CPCA will be doing what it can in the coming days and weeks with outreach to federal Ministers and senior officials on the benefits of coatings and how it helps the government get to net zero emissions by 2050.

The paint and coatings industry is part of the solution.