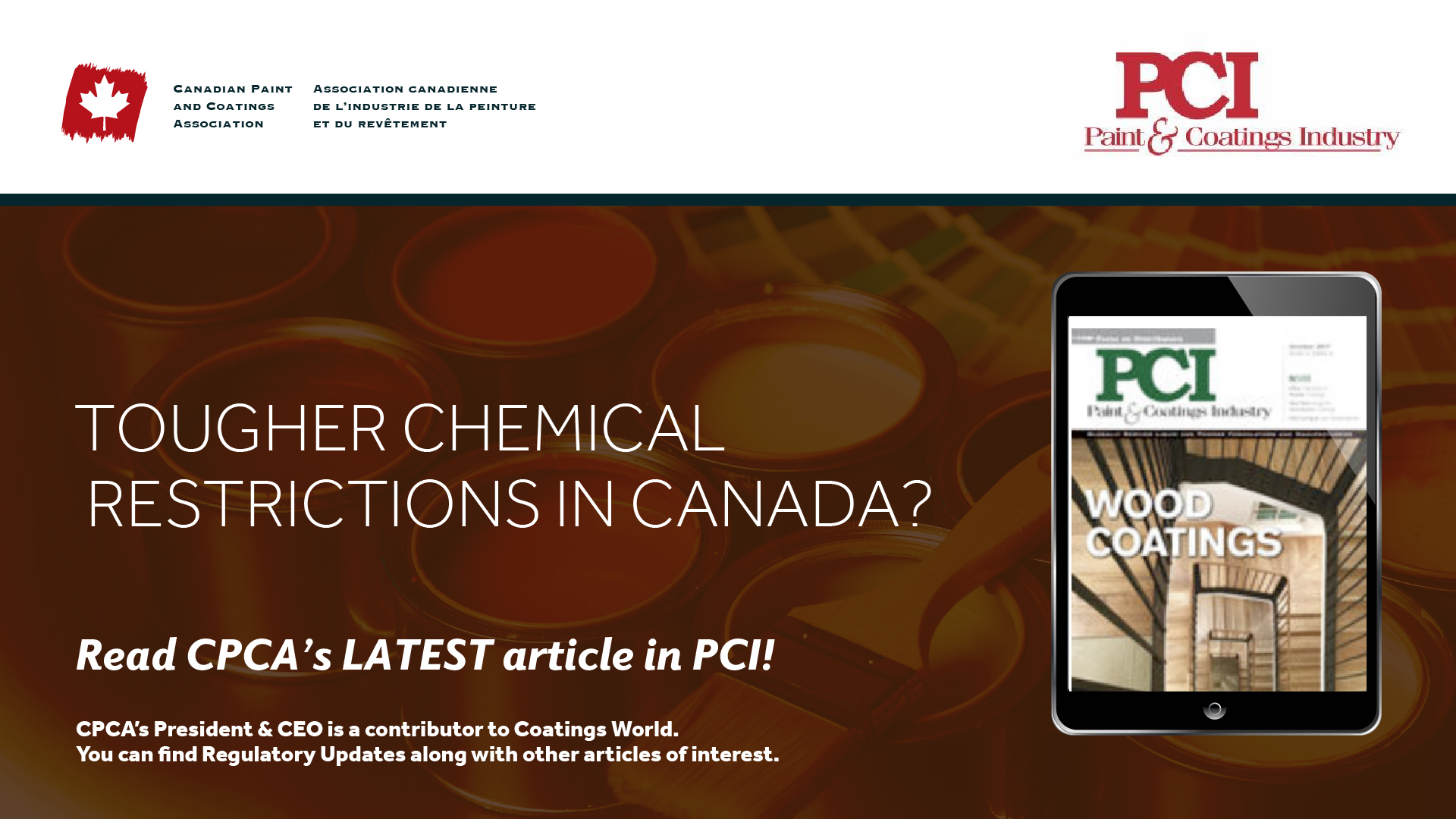 The Canadian regulatory landscape continues to churn. It is important for multinational companies to take note given the fact that more than 50 percent of coatings, adhesives, sealants and elastomers (CASE) are now imported into Canada. This represents a large spectrum of raw material ingredients and finished products shipped primarily from the United States. This is also critical in terms of the need to be fully compliant with existing and evolving regulations. It is critical to ensure that the plethora of substances being assessed under the federal government’s Chemicals Management Plan (CMP) has the necessary data to render decisions on substances of concern as toxic or not. In many cases, without the necessary data a substance could inadvertently be declared toxic and subject to a higher degree of risk management than necessary, including concentration limits being lowered, thus negatively impacting product performance or discontinuing certain products altogether.

The federal Parliamentary Standing Committee on Environment and Sustainable Development tabled its report on June 15 with 87 recommendations for amendments to the Canadian Environmental Protection Act (CEPA, 1999). Industry’s worst fears have been realized, especially in a majority government situation where the majority views of the Standing Committee could gain traction in the government’s official response to be tabled soon. It is not clear if that will be the case, but one thing is certain: the majority members on the Committee, MPs in the same government, along with the environmental lobby of 22 nongovernmental organizations, will push hard to get its recommendations reflected in the government’s response. Industry groups must now do everything possible to ensure Canada does not take a step backwards and “undermine the common approaches historically adopted by Canada and the United States on chemicals management,” as the minority opposition members on the Standing Committee accurately noted. This also takes on more significance, as both countries are about to enter negotiations to tweak NAFTA for greater regulatory alignment between the world’s two largest trading partners.

A process will now unfold, requiring the government to respond within 120 days as to how it will accommodate those amendments, or not. A key issue for industry is that the “shot clock” has already started in terms of making the case for not proceeding with many of the report’s misguided and unsubstantiated recommendations related to such things as endocrine disruptors, the precautionary principle, mandating assessment of substitutes in all cases, enhanced labelling requirements, reverse burden approach for industry on data collection, environmental justice principles enshrined in the Act, and more. This began at a time when the House of Commons was in recess for the summer and members hit the BBQ circuit, returning in mid-September. However, CPCA and other industry associations continued to work with government officials who have continually worked hard to perfect the assessment of chemicals over the past 10 years. That has made it arguably the best approach to chemicals management globally. A fact the NGO community and the Standing Committee have chosen to ignore rather than preserve a very credible and widely accepted process. A departure from the way in which Canada assesses chemicals would not be good for anyone, including those concerned about human health and the environment.

Canada’s approach to chemicals management over the past decade is an evidenced-based assessment of chemicals in commerce, using the latest scientific data to determine a chemical’s risk to human health and the environment. We believe the CMP approach is completely in line with the current Liberal Government’s oft-stated focus on “evidence-based decision making” with respect to public policy and programs. It is industry’s contention that even though the CMP process is onerous and costly, companies believe it is the right thing to do to protect human health and environment, while still delivering highly performing products that customers have come to expect. A change of course at this time could be troubling for industry and slow down the process of chemical assessment, serving no one’s interests, including the environment.

CPCA does not support a REACH approach, which has been widely criticized for being time-consuming, costly and inefficient. Officials at Environment and Climate Change Canada agreed with that view when they stated in Committee hearings that, “REACH is an extremely time-consuming process that requires extensive work on the part of users and producers, but that actually has a lot fewer decisions than we’ve achieved under the Chemicals Management Plan.” A long-time observer of the EU process on chemicals, College of Europe Visiting Professor Daniel Guéguen, recently commented on the “flaws of today’s EU governance (with) no objective science, full-on opposition between NGOs and industry, and an incomprehensible process. Faced with this situation made possible by an extensive application of the precautionary principle, you would think that the science could decide it. But NGOs reject science-based policymaking.” Going down a similar path would not bode well for Canadians, and some have suggested that this report’s recommendations, if implemented, would do just that.

The Official Opposition views presented in a separate section of the report reflected the lack of balance in the Standing Committee Report, noting the strong focus on NGO submissions and testimony. It pointed out that 24 recommendations by witnesses on one issue alone related to “controlling toxic substances” revealed that a majority came from three academic witnesses (42 per cent) “with no evident scientific or practical experience in the field of toxicology.” Two-thirds of all the evidence before the Committee came from NGOs, and several were afforded an opportunity to make further submissions, beyond the deadline, which was not offered to industry.

In the final analysis, the Opposition Minority Report stated, “Had this study been more focused and more time been allocated to receiving critical testimony, this report could have represented another step forward in improving the rigour of Canada’s environmental protection regime. Sadly, the majority’s recommendations contained in the report are in many cases NOT adequately borne out by supporting testimony and evidence before the Committee. They appear to reflect an ideological bias in favour of a wholesale remake of Canada’s environmental protection regime that could have a profoundly chilling effect on Canada’s economic competitiveness.”

Industry groups, including CPCA, have been working since June to address the lack of balance in the report in order to prevent Canada from going down the same rocky road as the EU on chemicals management. Moving in such a direction would not serve anyone’s interests with respect to human health or the environment.

View the Article in PCI Magazine