Economics of the Pandemic for Paint & Coatings 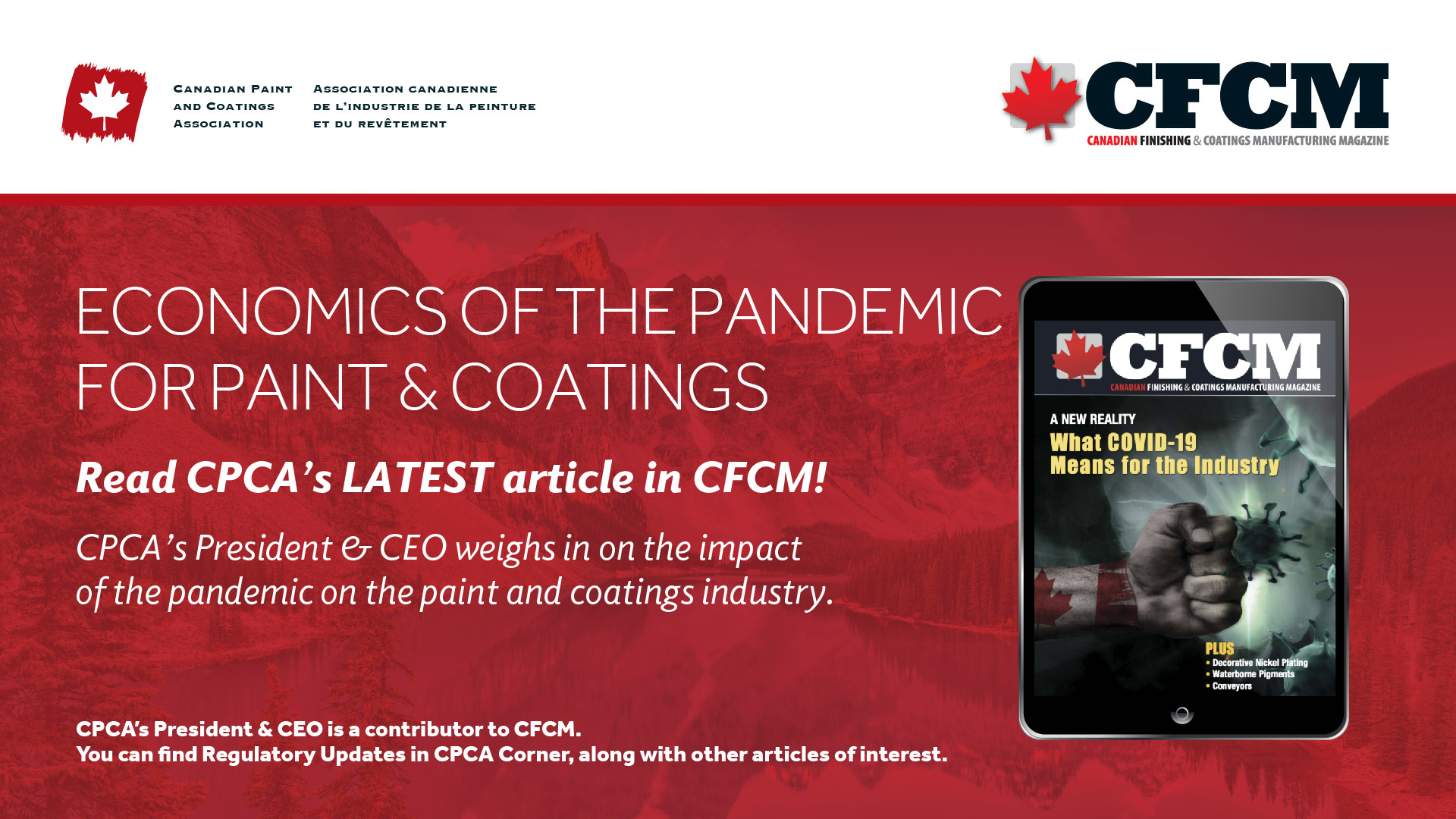 THERE IS MUCH DOOM AND GLOOM about the economic fortunes caused by the pandemic, which is obvious and understandable. There is also some trepidation with the reopening of the economy. Some have tried to see the positive in these uncertain times by focusing on health, including economic health. At the time of writing, then Governor of the Bank  of  Canada,  Stephen  Poloz,  noted  that there was indeed a great plunge in output in March as never before, but he cautioned that the crash will be “cushioned by low-interest rates and hundreds  of  billions  of  dollars in government support.” We have seen governments become unusually nimble in dealing with the fallout in recent weeks and we are pleased they have learned this new, rarely seen skill. The Governor added that if the virus spread slows by the summer,  the economy should make up much of the lost ground by the end of the year.  To that we say, Amen!

In early May, CPCA released an economic update related to the pandemic, completed by Orr & Boss, to provide members with some context specifically related to the paint and coatings industry. It confirmed the negative impact of the first and second quarters and aligns with what the Governor said. It sees Canada’s GDP collapse in the second quarter, as does TD Bank, by about 42 per cent. TD predicts the economy will bounce back by 33 per cent in the third quarter and about 16 per cent in the fourth quarter. If that holds true, the economy will be on the rebound and on a clearer path to profitability in the not-too-distant future.

Similar robust measures were taken in the United States in an effort to pump money into the economy and prop up markets. Government spending to date amounts to about one-third of GDP in a very short period of time and that is calming markets. In any case, investors don’t really have a lot of places to go with their money with government bonds offering super-low returns, if at all. It seems as though the market is feeling a bit more optimistic about the future than the science around coronavirus would suggest. Only time will tell.

There’s no guarantee this market rally will last or if investors have it right. Many traders, analysts, and experts admit everyone is operating in a black box. Some experts don’t understand at all and one analyst recently noted, “Nobody knows what’s really going on.” The separation of markets from the economy also happened during the recession in the late 1990s with the global financial crisis and it’s not clear if there are similarities as this downturn is several times larger than what has been called the Great Recession.

CPCA’s multinational members operating globally have also seen more stability than expected during this difficult time across the globe. They seemed to have learned important lessons from the recession just 12 years ago, which has helped them navigate these rough waters. The fact that most member companies continued to manufacture goods and conduct retail sales, where they have them, also bodes well for them being in good position for the next quarters. The paint and coatings category was designated an essential service by Public Safety Canada and in all the provinces across Canada because of their role in critical infrastructure; medical equipment including ventilators; food security including with food packaging; etc. However, as with everything, there could be some surprises in the numbers across industry as noted by Orr & Boss in the aforementioned economic update done for CPCA.

Rebounds from previous recessions led to a “new normal” of sorts and what that looks like could determine the speed of economic recovery. A crucial part of that new normal has much to do with the consumer and how he or she views the world. Some have suggested that there may be a “new modesty” level wherein people are less likely to spend on non-essentials like restaurants and chic clothing, with more cocooning at home, more gardening and Netflix. This is likely to lead to an increase in savings, which had been at historic lows before the pandemic. Might they take on more home-based projects that involve paint and stain? We hope.

But how long the modesty or austerity levels will hold is anybody’s guess and certain sectors could be impacted more than others. It would be a guessing game to predict what the near future might be and trying to time the markets is a fool’s game. One thing is certain when it comes to humans, it’s safe to say that socialization and consumption is more the true norm, as opposed to isolation and austerity. We are all hoping for a healthy population first and foremost, and the best economy possible with good jobs for all.

View the Article in CFCM