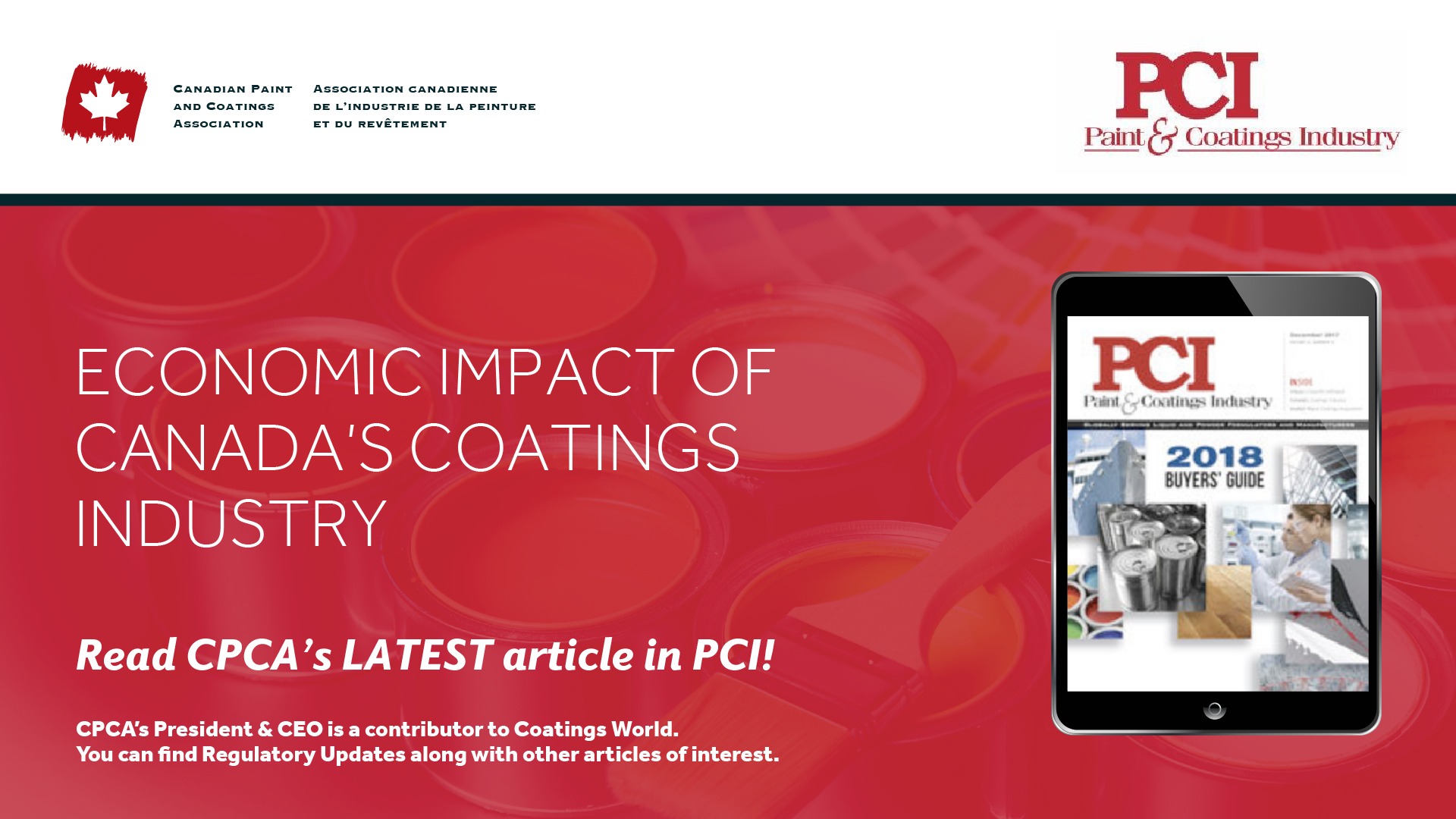 CPCA worked with Orr & Boss on a comprehensive Economic Impact Study of the Canadian paint and coatings industry, which includes adhesives and sealants. In effect, the study addresses all aspects of the industry generally referred to as CASE: coatings, adhesives, sealants and elastomers. While there were no real surprises it does substantiate regular data collected by CPCA throughout the year in various industry segments. The total economic impact exceeds $12.2 billion in revenue on direct sales of $3.2 billion annually; supports more than 86,000 jobs, and creates total wages estimated at almost $3 billion per annum. The study also revealed that wages and salaries are 18 per cent higher on average in the paint and coatings industry than in other industry sectors.

The primary reason wages and salaries are higher is based on the fact that the paint and coatings industry is a productive industry, with labour content comprising a relatively small portion of the costs to manufacture paint. The trend of higher wages follows the chemistry industry generally. For all employees, Statistics Canada data indicates the average hourly earnings in Canada are $25.93 or $51,860 per year. The chemical industry as a whole pays an average wage that is 39% higher than the average Canadian industry. The paint and coatings industry is part of the chemical industry, and thus it is not surprising that wages are higher for coatings companies.

The industry has also enjoyed steady growth over the years. Since 2008, the Canadian paint and coatings market has grown at a Compounded Annual Growth Rate (CAGR) of 2.0%, which is above the Canadian GDP growth rate of 1.5% CAGR over that same time period. The expectation is that the Canadian paint and coatings industry will continue to grow at that level, which is driven by construction activity, automotive manufacturing and overall industrial production. Furthermore, there is room for paint consumption to grow in Canada. The per capita paint consumption in Canada is 13.7 litres per person, versus the United States at 15.8 liters per person. If the paint consumption rate in Canada grew by 15% it would equal that of the United States.

It was no surprise that Ontario and Quebec are the leading beneficiaries of economic activity in the paint and coatings industry, at 36% and 23.9%, respectively. They also account for 79% of the employment and 78% of the revenue. More than 60% of Canada’s population lives in the two largest provinces with the strongest manufacturing base. These key elements are broken down in the study by key players in the coatings industry, from raw material suppliers to distributors along the value chain, right to the point of sale for the various types of customers.

In general, the adhesives and sealants (A&S) market follows established trends in the paint and coatings market. Ontario and Quebec are the provinces with the largest concentration of adhesive and sealant manufacturers. These two provinces account for about 66% of A&S economic output and a similar amount of employment by A&S companies.

Paint and coatings products are used in many different end-use segments, on many different substrates, whether for metal, wood, plastic, paper, glass, rubber, ceramic, concrete or composite in a vast and diverse range of products. In fact, almost all end-use segments use some paint and coatings in manufactured finished products; thus, the drivers of the paint industry are generally the drivers of the overall Canadian economy (e.g., construction, transportation, energy, etc.). Some of the key segments in the Canadian paint and coatings industry include architectural coatings, automotive OEM, automotive refinish, coatings for other means of transportation, industrial maintenance and protective, wood coatings, powder coatings, coil coatings, packaging coatings, general industrial, and marine coatings.

The study drilled down on the types of coatings used in all aspects of life on a daily basis for decorating our homes, marking our roads, protecting our buildings and other infrastructure, supporting valuable assets like our plains, trains, ships and automobiles, and many others. The end-use markets for these were analyzed in some detail. Key sectors reviewed included automotive OEM and refinish, architectural, general industrial, coil, industrial maintenance and protective, marine, packaging, powder, transportation, industrial wood, and adhesives and sealants. The relative values for each were analyzed.

The strongest segments for CASE in Canada, which are no different from most countries, including architectural, automotive OEM and automotive refinish coatings. These three segments account for nearly 70% of the total market value. Other key segments include industrial maintenance (IM) and protective coatings (PC), general industrial, wood and coil. The study focused on sales at the paint company level, broken down for all segments by both volume (litres) and value in (CDN dollars).

For all segments, there are key players driving the economic outputs in addition to manufacturers. The study looked at the impact of the raw material suppliers, the distributors, plant equipment suppliers, freight companies, paint accessories and related products, retail stores, paint users including DIY, and various applicators such as contractors and body shops. It also looked at the impact of program operators dealing with paint recycling and stewardship.

Paint and coatings manufacturers are the key drivers of total economic output, including adhesives and sealants, accounting for 36% of the overall economic output and 24% of overall employment. Raw material suppliers/distributors, professional coatings contractors and retail stores combined account for the remaining 64% of overall economic output and 76% of the overall employment. The total chemical raw material and packaging items sold in the Canadian paint and coatings market is estimated at $1.1 billion/yr. As with most parts of the Canadian paint and coatings industry, Ontario and Quebec are again the key provinces where economic activity is generated by strong clusters of companies in the coatings industry.

The movement of raw materials, packaging items and finished paint also generates economic activity and employment across Canada. Orr & Boss estimates the paint industry in Canada spends $131 million per year on freight movement. As with other data presented in the report, the employment and revenue figures are those that are generated from economic activity directly in the paint industry.

The economic output and employment for three types of “paint stores” were also considered in the study. The first is the corporate-owned store, which are stores owned and operated by the paint manufacturers or brand owners. These can be multi-national manufacturers, most of which are publicly traded companies operating worldwide or privately held, Canadian-owned and operated stores. The second type of paint store is the independently owned and operated paint store or dealer who buys directly from paint manufacturers and then sells to contractors, homeowners and various types of applicators. Finally, the stand-alone paint stores exist in several other retail categories, which include hardware stores like ACE and Home Hardware, home centres or ‘big box’ stores like Home Depot and Lowes, and mass merchants like Walmart and Lumber & Building supply stores. Home centres and hardware stores sell the largest proportion of paint not sold directly through corporate-owned stores. There were also three sets of major “end users” considered in the study: contractors, body shops and general applicators.

The study revealed that the coatings industry while continuing to address certain challenges, continues to be a stable and steadily growing industry in Canada.