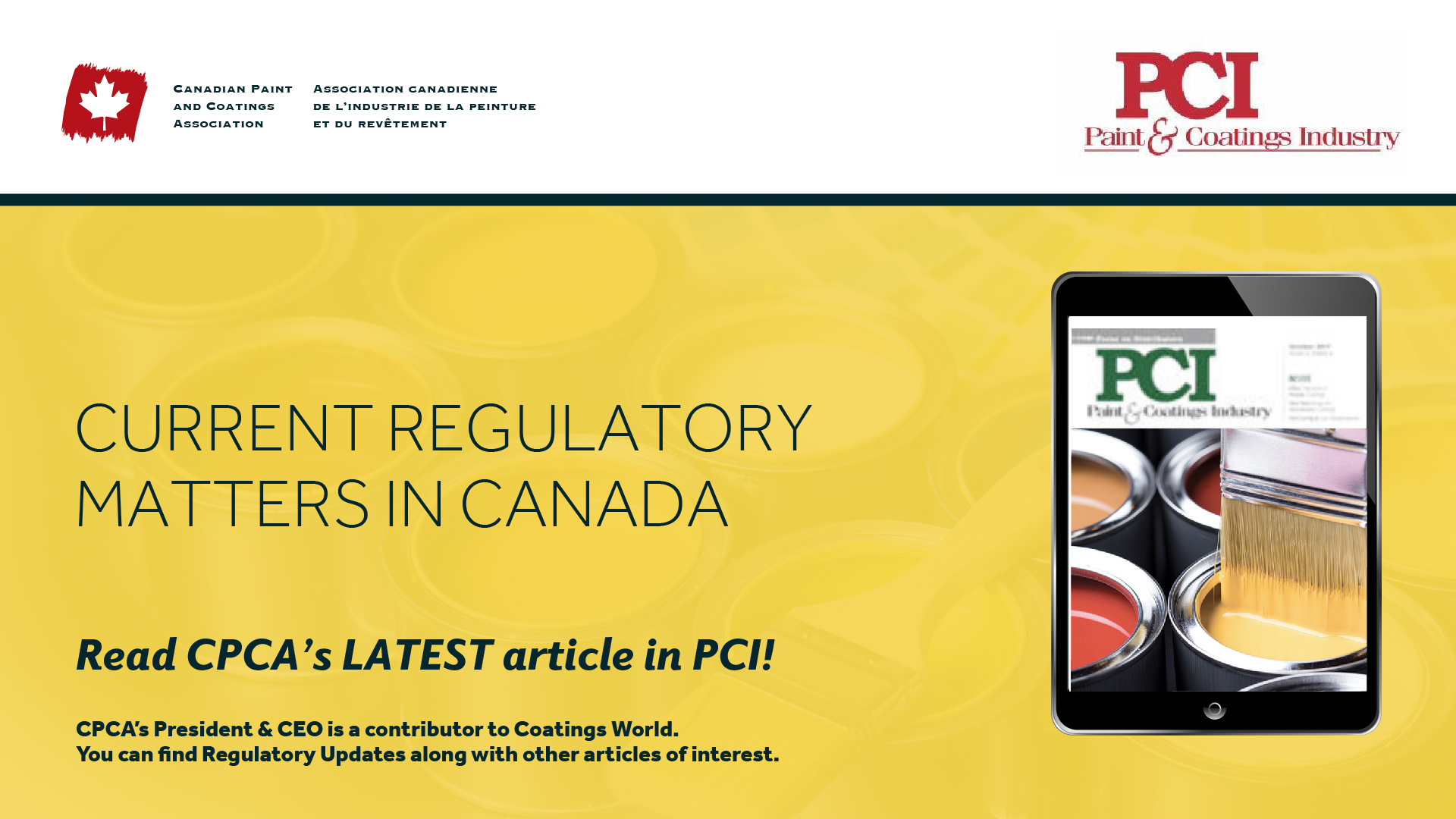 CPCA was pleased to announce that the Canadian government’s Pest Management Regulatory Agency re-instated the use of OIT for paint and coatings and related products in Canada. The substance had been prohibited for use in these products since May 2019, and the ban had been a sticking point in discussions around the lack of alignment between Canada and the United States on re-evaluation of antimicrobial preservatives. The decision to reverse the ban will ensure that paint producers have access to a critical ingredient used for the preservation of paint and stains, which has been integral to the transition from solvent- to water-based coatings over the past decade. In addition, the same data used to re-evaluate OIT led to more positive news for industry when the usage rates for another important preservative – CMIT/MIT – reverted to previous functional values in Canada and now in full alignment with the United States as well. This points to the dire need for officials re-evaluating critical substances to fully consider ‘all’ the available science-based data in rendering final decisions. Currently, Canada is re-evaluating six other critical biocides used in coatings and adhesives/sealants, and a robust submission was made by CPCA and its members to ensure proper values are used in risk calculations at every level.

CPCA just finalized a major submission to the Pest Management Regulatory Agency on the ongoing re-evaluation of six paint biocides used for antimicrobial control, namely, chlorothalonil, ziram, folpet, dazomet, diodofon, sodium, and pyrithione, which are critical for the coatings industry in Canada. Supplier and manufacturer members provided critical data to inform industry’s position re-iterating the need for holistic re-evaluations of paint preservatives using risk calculations that are reasonable in terms of toxicity related to risk calculations. In the past we have seen values that far exceed those of the U.S. EPA for the same ingredient, which causes severe problems for both product formulations as well as trade and commerce between the largest trading partners on the globe. These issues prompted CPCA to work with PMRA on the creation of a Coatings and Adhesives Working Group for a more robust collaboration and a realistic framework for both PMRA and industry, one that is based on science first and foremost. This work is critical for the paint industry in Canada as these preservatives are part of a very limited array of biocides still registered for use in the coatings industry.

The latest biannual meeting of the sectoral Paint and Coatings Working Group took place on December 3, 2020. Regulatory officials from Health Canada and Environment & Climate Change Canada provided updates on multiple sector issues. Ten other industrial categories, not covered under current regulations, may be added as part of this effort. Members were informed that government seems to be aiming for the adoption of CARB 2019 VOC limits in a proposed amendment for 54 categories in the architectural VOC regulations beginning in 2021. A more formal consultation will take place in the Spring of 2021, while CPCA continues advocating for the adoption of OTC Phase II limits over CARB, but that may be a difficult road ahead. CPCA consultations with member companies will resume early in 2021.

There are a number of upcoming publications for chemical assessments for the coatings sector, several re-evaluations for key biocides used in coatings, and the recently announced plastic waste initiative proposes to add ‘manufactured plastic products’ to Schedule 1 of the Canadian Environmental Protection Act (CEPA), designating them as toxic. This would be an unfortunate precedent-setting case that would henceforth capture other manufactured products, when the Act was in fact designed to conduct risk assessments on substances used in products, not the ‘manufactured’ product. This has been done under the Chemicals Management Plan for the past 15 years. It is unclear if the federal government would make such an approach work, if indeed it were to proceed. If it does proceed it would also capture polymer dispersions, as microplastics would also be designated as toxic by CEPA, under Schedule 1 of the Act. If this amendment were to proceed it could greatly impact polymer dispersions now used in a wide range of product formulations. As such, CPCA and many other industry associations, both in Canada and the United States, have filed Notices of Objection of the Order proposing such an amendment.

The ongoing risk assessment of chemicals in commerce continues under the Chemicals Management Plan, which has now resumed regular publications after delays due to the pandemic. CPCA continues to monitor the substances implicated in coatings, sealants and adhesives, and updates members on regulatory actions via our digital platform, the Canada Coatings HUB as well as regular bulletins.

CPCA was pleased that the final screening assessment for the Phenol-Formaldehyde Resins Group concluded that all eight substances are not toxic under CEPA, since these are heavily used in paint and ink formulations. The final assessment for the Phthalates Group was also recently published. One of the 28 substances was proposed for prohibition in Canada, while 20 others will be closely monitored with follow-up activities. Additional details on the health risks associated with the Flame Retardants Group became available, which prompted the publication of updated draft assessments and risk management scopes for three substances in this group. These three – melamine, TCPP and TDCPP – are now proposed as being toxic under CEPA, and members were urged to review their uses in textile and furniture coatings in Canada. Finally, at the recent Paint and Coatings Working group meeting, government officials confirmed that the draft screening assessment for the Titanium Group (which includes titanium dioxide) is delayed until July 2022 due to competing priorities.

There are several groups of CASE-implicated substances being assessed between now and the end of 2021. Some key publications will be delayed because of COVID-19. CPCA continues to monitor closely Final Screening Assessment Reports (FSAR) for benzophenone, which will likely be concluded toxic at a very low level, hence affecting some resins currently used for indoor and exterior consumer paint products. Also expected is the publication of the FSARs for pigments and dyes and fatty acids, and their derivatives that are proposed non-toxic, and for triarylmethanes, of which there are two substances proposed toxic. Draft Screening Assessment Reports (DSAR) will be published for acids and bases, and monitoring continues on the DSAR publications on naphthalene sulfonic acids and salts, alcohols and aliphatic amines. CPCA submitted comments on the DSAR for ketones, challenging the toxicity decision for MEK, MIBK and 2,4-PD, which are used in certain liquid and aerosol paint and coatings products; and more widely, in allied products (thinners, removers) available to Canadian consumers. Similarly, also soon to be published will be the FSAR for the Furan Group, in which furfuryl alcohol is proposed as toxic for its current use in wood strippers with no cost-effective substitute available. as well as tetrahydrofuran, a common solvent in industrial CASE products. Comments were filed by CPCA on those substances.

The draft screening report for ethers, manganese, aluminum and titanium compounds, and titanium dioxide are postponed no later than winter 2021. CPCA will be watching out for other important DSAR publications in 2021, such as for benzotriazoles and benzothiazoles, esters, ethers, silver and other polymers for which the government did not provide any timeline in 2021. The government did not confirm the DSAR publication previously expected in Summer-Fall 2020 for piperazine and substituted phenols, neither for the FSARs for siloxanes (non-toxic), epoxides and glycidyl ethers (non-toxic) and petroleum coal tars and and base oils (non-toxic), among others.

For NMP, CPCA learned that the final report is being delayed until a more final evaluation can be published by the U.S. EPA under TSCA. The TSCA draft risk evaluation report was published at the end of last year, along with a risk management evaluation document, and a final risk evaluation report is expected at the end 2020 or in the first part of 2021. For anthraquinones, the current levels of these non-toxic substances will continue to be tracked and may be the object of future actions by the government. Recent Chemical Assessment Reports included turpentines, zinc compounds, resins and rosins, talc, copper compounds, and several others of interest to the coatings sector. Status, submissions and other reports for all of these are posted on the digital platform, Canada CoatingsHUB.

To stay on top of the ongoing regulatory changes CPCA added the chemcial substance database to the CoatingsHUB in January 2020. It contains 1,100 substances known to be used in the coatings, adhesives, sealants and elastomers sector (CASE) used by companies in the industry, the status of which can be searched by CAS-RN. These CASE-related substances were identified based on data obtained from CPCA members and from government information derived from various Section 71 mandatory information gathering initiatives under the Canadian Environmental Protection Act (CEPA) since 2006. As the federal government moves forward with further chemical assessment of chemicals of concern, CPCA will continue to update the substance database for each chemical assessed under the CMP. This ensures all information in the database is current and can easily be reviewed by members via the Canada CoatingsHUB. Moreover, it ensures companies can plan for any changes potentially impacting their products, whether bans, use restrictions or new uses, thereby ensuring full compliance for those products in Canada. No other sector and no other country has such a comprehensive chemical substance database specific to the coatings industry within a country, according to a globally recognized expert on both digital platforms and the coatings industry.

View the Article in PCI Magazine