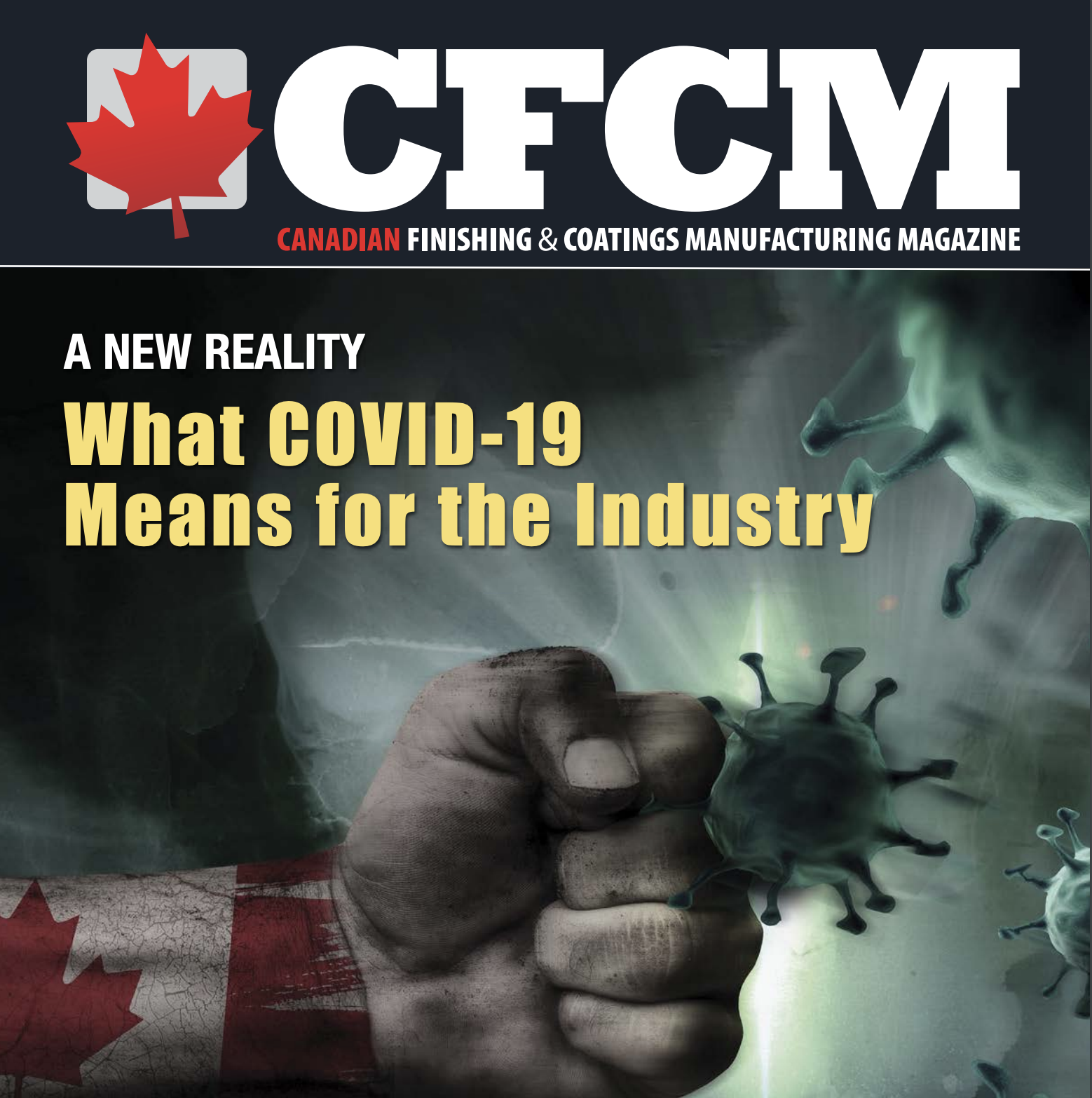 CPCA distributed a backgrounder to all federal and provincial government departments to emphasize how paint and coatings should be considered essential products to support critical working activities and infrastructure maintenance in uncertain times. CPCA recommended that these activities be specifically mentioned in all lists of essential services. In response to the letter from the Canadian Paint and Coatings Association, Public Safety Canada added the following reference to paint and coatings: “Workers who support the supply chain of building materials from production through application/installation, including cabinetry, fixtures, doors, cement, hardware, plumbing, electrical, heating/cooling, refrigeration, appliances, paint/coatings, and employees who provide services that enable repair materials and equipment for essential functions.” These essential services include activities from production to application, which had already been captured in the list generally and also captured within the provinces’ essential list. Given that it was not specifically stated CPCA wanted to ensure that any further reference to the Public Safety Canada essential list was conclusive and not misinterpreted, especially as governments are now considering restarting the economy in the coming days.

The Conference Board of Canada changed its near-term projections for the Canadian economy which is now expected to contract four per cent in 2020, down from an expected gain of 1.7 per cent as predicted in January. However, a 4.9 per cent recovery is anticipated in 2021 as the virus’s aftermath fades. Canada could shed 330,000 jobs over the second and third quarters in an end-of-August scenario, while the jobless rate could climb to 7.7 per cent. The key issue for business is liquidity to survive the crisis. The proportion of entrepreneurs reporting a negative impact of COVID-19 on their operations rose from 39 per cent in mid-March to 90 per cent two weeks later, according to BDC surveys.

Orr & Boss, a CPCA Affiliate Member, completed a Canadian Market Update for CPCA to address outstanding and ongoing questions caused by the pandemic for the paint and coatings and adhesives and sealants industry in Canada. CPCA would like to thank Doug Bohn at Orr & Boss for leading this effort, which helped all CPCA members’ forecasting efforts during these uncertain times. As the response to the pandemic continues, the impact on the Canadian paint and coatings industry is becoming clearer. There will be a significant decrease in coatings sales due to the enforced shutdowns across the country. In summary:

Key points to consider in the outlook are:

Before the impact of the pandemic was known, we were expecting 2020 to show some modest volume growth of 1.5%. Housing was off to a pretty good start with existing home sales up three per cent in January and February of 2020 versus the 2019 levels. Automotive OEM was expected to decline about three per cent as production cuts at Canadian assembly plants continued. The other segments were expected to show volume increases in the one to two per cent range. In total, we were expecting the market to grow at a two per cent volume rate and four per cent value rate in 2020. This has now all changed due to the pandemic. The table below now provides our estimates for Q2 and full-year 2020. We are now expecting that the volume will decline by more than 20% in Q2 and by about four per cent overall for 2020. Segments, where plants have been shut down, will be hardest hit including auto OEM, General Industrial, and Powder Coatings. 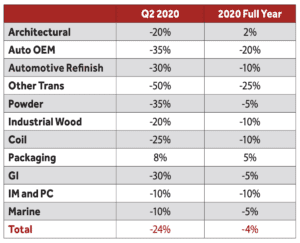 The primary assumptions in the above table are:

The paint industry supports the public and those on the frontlines of the COVID-19 response. The industry supports health care, hospitals, defence, food, hygiene, agriculture, energy, public works, information technology systems and many others. Life-saving equipment such as ventilators and medical monitors contain multiple components that must be coated to ensure performance and we want to ensure people are aware of that.

The recent Ministerial direction to Stewardship Ontario (SO) related to excessive funds accumulated in the Municipal Hazardous or Special Waste (MHSW) program was published on April 1 and another on April 28. The latter was to ensure that funds will, in fact, be used for waste recovery and recycling and not more red tape in administering the windup of two materials still left with SO. It is hoped that things are clear now as to the way forward as those funds were designated for recycling, not unnecessary administration. It applies to the MHSW material categories for which there are approved Industry Stewardship Plans (ISPs) that include paint and coatings; pesticides, solvents and fertilizers; and automotive materials. After many discussions with CPCA and other industry groups, the Minister directed SO to move forward in a responsible way to ensure that 100 per cent of steward surplus funds, still retained by them “in trust,” be returned in a one-time lump sum transfer to the organizations that contributed the funds via internalized fees and which now operate ISPs independently of Stewardship Ontario. This is the only way to ensure they are used for the originally intended purpose waste recycling, not administration.

It is unfortunate that Stewardship Ontario continued its refusal to return funds it overcharged industry stewards via internalized fees before the Paint ISP was approved by the Minister in 2015. The Paint ISP has not been operating under Stewardship Ontario since before 2015 and two other ISPs also left shortly thereafter due to poor program management and lack of transparency, representing 80% of the materials now operated under other organizations. This leaves Stewardship Ontario with only two of nine material groups, which will soon be one with batteries being wound up in June 2020. Yet, they insist on retaining more than $12 million in reserve funds, most of which was contributed by the stewards who left years ago and with nothing to do with SO operations since that time. The detail related to the use of those funds has never been disclosed and yet they say it’s critical to windup two materials, which has been managed by two staff members for the past several years. This seems to be a cross-subsidization of materials with funds from other material-specific groups, namely the independent ISOs, which is in direct contravention of the Act.

It is interesting to note that Stewardship Ontario charges the remaining stewards under MHSW $3 million a year in administration costs for running the two remaining MHSW products, which has an operating cost of just over $10 million a year. That is 23 per cent in administration costs! These two groups also have to pay an additional amount in windup costs, increasing the 23 per cent significantly. As such, the paint and other stewards were wise to have created ISPs in recent years to escape such predatory costs.

In contrast, CSSA’s charges for administering the Automotive Services ISP as the program is about 10 per cent per year and Product Care’s administrative costs for the paint program is slightly less. It’s clear who stewards would prefer to have running their recycling program in Ontario. Clearly, Product Care has shown the way and proven the state of waste recycling in Ontario in recent years needs a major overhaul. It should also be noted that the inherent costs of recycling in Ontario is out of control with paint recycling in Ontario costing about twice as much per tonne than in other larger provinces. Yet it continues to persist and the current wind up plan approved by the oversight authority, Resource Productivity and Recovery Authority (RPRA), shows a lack of concern with productivity as it relates to cost-benefit for industry stewards.

There are many other areas of concern with the operations of waste recovery in Ontario, with growing costs of oversight as a recent presentation by the Retail Council of Canada clearly shows with numbers in excess of 400 per cent over two years for administration for the oversight agency, RPRA. This will need to be put under the light of public scrutiny in the days to come to ensure Ontarians are not subject to excessive charges with little increase in recovery and recycling to show for such cost, if the current system continues to run as it has. The Product Care model for paint program operations is one that should be modelled by other programs run by Stewardship Ontario and CSSA if they are permitted to continue running such programs with such high costs. In fact, the Product Care recycling model has been adopted by other countries such as the United States and Australia.

It is important for organizations supporting waste recycling in Ontario under current legislation to consider the cost versus the benefit because the producer always pays and is legally required to deliver. It would be important to do so under two important goals of this government: reducing red tape and to show manufacturers, producers, that Ontario is “open for business.” Ultimately, the costs are borne by all Ontarians as there is only one source of funds in any commercial enterprise in a capitalist system, no matter the source of the mandate.

WCC is examining the possible issuance of a global sustainability reporting approach for the paint and coatings industry. Findings related to the implementation of sustainable development goals will be the cornerstone of the proposed report. Additionally, the American Coatings Association recently published its Sustainability Report 2020. CPCA is working on publishing its own report later this year.

The Strategic Approach to International Chemicals Management (SAICM) published a policy brief on lessons learned since 2006, to inform discussions on the future focus of SAICM and the sound management of chemicals and waste beyond 2020. The brief, which was released in April 2020, explains that SAICM has made significant progress regarding strengthening capacity, commitment, technical knowledge, and political will to implement and mainstream chemicals into national planning. However, its objectives and 2020 goal to minimize the adverse impacts of chemicals and waste will not be achieved. More ambitious action is needed and the brief describes progress made and future considerations in moving forward beyond 2020 and CPCA is reviewing the industry’s response closely and will seek member involvement in the coming months.

Ontario facilities needing to prepare or update ESDM reports need to ensure that Schedule 3 standards and applicable models are now being used during the annual update of their ESDM report. The final implementation phase has been in effect since February 1 for all facilities listed under Schedule 5, which must demonstrate compliance with the newest point of impingement standards/limits by utilizing MECP approved versions of the more sophisticated dispersion modelling software (AERMOD and ASHREA).

Read the May/June Edition of CFCM