Will the Politics of Plastic Hurt Industry? 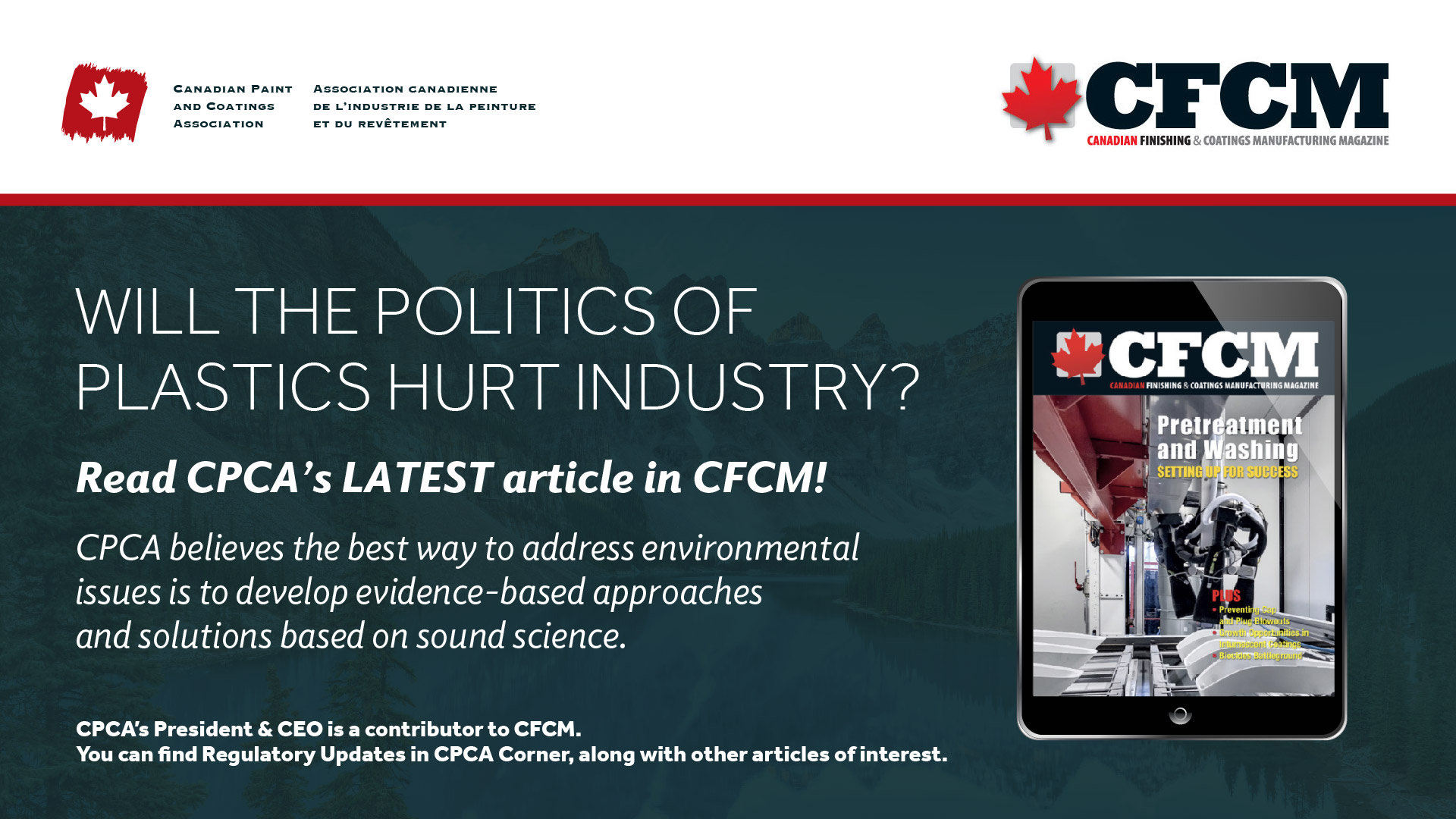 On the surface, the recent federal ban on several single-use plastics is positive given that such products cannot be recycled and should not end up in landfill for the next 500 years. However, a previously published federal government report in the Canada Gazette called the “Draft Science Assessment of Plastic Pollution” may not be as positive, including for the Canadian coatings industry. It goes too far with respect to macroplastics and microplastics vis-à-vis the environment and human health. It is widely believed that the Report is not a realistic basis on which to take action under existing federal environmental legislation, that is, the Canadian Environmental Protection Act (CEPA). The Draft Report suggests the intention is to assess plastic products, resins, types of packaging and the related polymers implicated in such an assessment, many of which are used in paint and coatings as well as adhesives and sealants.

Prior to the Draft Report published by the federal government in July, microplastics had garnered significant interest in regulatory agencies worldwide, especially in the European Union. CPCA has been monitoring developments in the EU over the past several years in concert with the World Coatings Council. It is critically important that governments, including the Canadian government, establish a clear definition of these materials and recognize the absence of standardized methods and analytical techniques for their assessment, which thankfully the Government’s own Draft Science Report acknowledges. Without such a clear definition one cannot accurately quantify microplastics in the environment and thus governments cannot take evidenced-based regulatory action, which the current Canadian government has always maintained is the foundation on which regulation must be based.

CPCA believes that a more thorough assessment of the related risks would also be necessary before the federal government can develop effective risk control measures for both macroplastics and microplastics pollution. The current societal risks associated with the use of macro- and micro-plastics do not warrant immediate regulatory action. There is no objective scientific evidence that indicators of environmental health such as air and water quality or biological diversity have been impacted by macro- or microplastics in a way that would necessitate the need for the Report’s recommendations to be carried out as regulatory actions. So, why would the federal government indicate that it wants to do so now?

Generally speaking, a much more robust scientific evaluation of the risks associated with plastic materials would be needed first. Risk assessment activities should directly target the underlying risks, if any, which would be required for cost-effective risk assessments and ultimately risk management strategies, like a regulation, in support of any efforts to mitigate negative environmental impacts.

The Report states that, “Plastics are often defined by their size, with macroplastics being larger than 5 mm and microplastics being less than or equal to 5 mm.” This Canadian definition of microplastics, extracted from various studies, appears to create an enormous scope for these materials, as it seems to include all polymer types and their dispersions which all fall under the 5 mm limit. The Canadian Government may wish to consider the pitfalls of such a broad scope as evidenced by the EU experience. An initial ECHA working definition in the EU included solid and semi-solid particles and did not distinguish between synthetic (i.e. artificial), naturally occurring or modified naturally occurring polymers (e.g. cellulose) and between water soluble and water insoluble polymers. Clearly, naturally occurring polymers are inherently biodegradable in the environment and therefore the ECHA definition eventually evolved and those polymers were not considered as microplastics. Non-solid polymeric particles in liquid emulsions were also not considered microplastics. This points to the difficulty in finding a reasonable working definition that can be used in developing effective risk assessment approaches and eventual regulations in this area.

There is little consensus on which products are the most likely contributors to releases to the environment and their relative impact on secondary microplastic releases, if any, such as on marine ecosystems and sediments. The latter two endpoints were given prominence in the Draft Science Report, which also references many recent public reports of plastic waste in oceans. CPCA raised concerns here and cautioned that adequate risk assessment findings and mitigating factors must be ‘fully’ considered in quantifying potential releases of primary microplastics from particular products or class of products. The ultimate effect of a well-intentioned effort to protect oceans from plastic must not result in causing irreparable harm to Canadian manufacturing and trade due to mischaracterization of microplastics.

Paint products contain intentionally-added polymeric forms with a size range of less than 5 mm, such as microbeads, pellets or microfibers, which provide certain desirable performance properties but have no possible pathways of release to the environment or inhalation because they are ‘embedded’ in the applied coating. Once the paint is applied as a film and fully dried the microplastics in the film are physically bound in a solid matrix. Possible degradation of a paint film occurs due to a number of factors including weathering (UV light, and humidity) and would only be significant when the paint is applied on an exterior surface. In the case of degradation, the paint film breaks down into flakes or dust, many of which are in the size range that would label them as ‘secondary’ microplastics. However, the breakdown of individual ingredients in a film is extremely unlikely. Moreover, there is currently no reliable evidence that exterior coatings are a significant contributor to secondary microplastics.

It has been suggested that consumer paint products, with infrequent release of microplastics, may lead to down-the-drain releases, but these releases are estimated to be < 1%. Furthermore, the vast majority of leftover paint is already recycled by waste recycling programs across Canada, which is paid for 100% by manufacturers as part of the industry’s commitment to responsible product stewardship. CPCA strongly supports further research to identify pathways and frequency of primary and secondary microplastic releases. Based on the foregoing challenges there is widespread industry disagreement with Government references to paint and coatings as “one of the major contributors of microplastics.” There is no evidenced-based rationale for such an assertion. The primary reason for such a belief is the fact that substances or mixtures – and their physical properties – are permanently modified when the substance or mixture is used. At the time of use it no longer falls under the meaning of a microplastic and thus should be excluded from the scope of research on microplastics altogether.

The same can be said for food packaging. The federal Government’s Draft Science Report maintains that there is no conclusive scientific evidence that food packaging materials, including food coating materials when used as intended, are a source of microplastics released in food or bottled water, which may lead to health effects of concern. It must also be noted that plastic additives are mostly not co-polymerized and thus less likely of being leached into the environment. The Draft Science Report also includes flame retardants and phthalates as part of these additives, some of which are found in paint and coatings. CPCA has cautioned the government and reminded them of the fact that additives are usually incorporated at low concentration levels in products. And, in the case of paint and coatings they also remain embedded in mixtures, within a matrix, and in the applied paint film. This provides greater certainty with respect to the unlikely potential there will be releases and risks to human health and the environment.

CPCA’s main concerns and recommendations with respect to the federal Government’s “Draft Science Assessment of Plastic Pollution” can be summarized as follows:

The paint and coatings industry in Canada must stand on guard with respect to how this issue evolves over time. It is a politically charged subject related to plastic waste in our oceans that has somehow morphed into a potentially negative outcome for the chemical manufacturing sector, including paint and coatings, and this must be checked sooner than later.

View the Article in CFCM